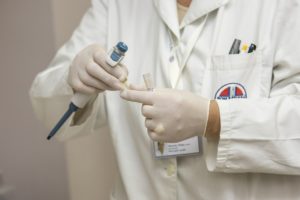 One of Our Recent Medical Malpractice Cases: No Oxygen

We successfully alleged medical error by the hospital and its staff that caused our client’s husband’s death. Her husband was admitted to the hospital with a respiratory problem. While in the hospital, he was on an oxygen cannula 24 hours per day. The day before his death, he was taken to the restroom without his oxygen. He became short of breath and his oxygen saturation levels dropped. He had to be rushed back to bed to resume his oxygen. The next day, he again ended up in the restroom without his oxygen and this time he was unattended. He was later found near death after passing out. He could not be revived and, tragically, passed away later that same day.

The hospital staff gave conflicting testimony about whether our client’s husband was taken to the bathroom or whether he went on his own. We took several depositions to investigate the facts and hired expert witnesses to testify regarding the negligence of the hospital and nursing staff and the cause of death. Although the hospital initially denied responsibility, BWO secured a $200,000 settlement for our client in this recent medical malpractice case. Insurance adjusters have a job and that’s to deny one of the benefits you are rightly owed.

Don’t suffer just because you’re not familiar with this procedure. Let us stand by your side and fight for what’s right. When a loved one is hurt, it may feel as though you’re all alone in the procedure to get back on your feet. We’ll help you deal with the pressure from insurance adjusters and bill collectors, provide expert advice and to ensure that you’re treated fairly throughout the process. We have an established track record of over 40 years focusing on behalf of injured people in Missouri and are all set to offer the same results-oriented support to you. We know from experience that injured customers are often forced into unemployment and also do not have insurance. We understand the burden of worrying about medical bills and confronting harassment by creditors. We can assist you with these issues and at times arrange for payment of medical bills from your settlement proceeds.

Our attorneys at BWO won a recent medical malpractice case for $650,000. Because of confidentiality, the parties involved and details of this case can’t be revealed. Nonetheless, this was a fantastic outcome for a very deserving customer. At Buchanan, Williams, & O’Brien, we also handled a recent medical malpractice case regarding the wrong medication for a client. Our client, who was hospitalized, received medication in the form of a shot from the medical providers. Unfortunately, the medication was intended for a different client who happened to be infected with Hepatitis C, a potentially life-threatening infectious disease. Our client tried to resolve the matter without an attorney but found he could not.

He hired attorneys from BWO to take over the wrong medication lawsuit case. We immediately secured the relevant medical records, reviewed them, and mapped out a strategy for the case. In the end, our attorneys were able to get the hospital to pay the client an amount that reflected the seriousness of their mistake. If you were the victim of a recent medical malpractice case and are having trouble with the situation, contact an experienced attorney for support. At Buchanan, Williams, & O’Brien our attorneys have fought and won countless recent medical malpractice cases. We are ready, willing, and able to review your case and get you the compensation you deserve.